Member Inquiry
Inquire
会员查询所显示资料及其他文字说明均有您注册时所填写，本系统不设修改、增加、删除会员信息等功能，如若需要修改信息或者变更手机号码的用户请您携带会员卡到门店进行修改密码修改可由手机发送验证码MMXG到123456789进行修改，谢谢您的配合！ Supplementary information The member display information and other text descriptions are filled in when you register. The system does not have functions such as modifying, adding, and deleting member information. If you need to modify information or change your mobile phone number, please bring your membership card to the store You can modify the password by sending the verification code MMXG to 123456789. Thank you for your cooperation!

Red Times Rainforest Haematococcus, one of the four major forums of the 10th Asia-Pacific International Conference on Applied Algae in Life Times

Lecture on Red A Haematococcus pluvialis, one of the four major forums of the 10th Asia-Pacific International Conference on Applied Algae

The International Academic Forum on Application and Innovation of Haematococcus pluvialis, which was sponsored by Yunnan Algae Bio-Engineering Co., Ltd., a micro-algae enterprise, was held at the Qianhu Lake Hotel in Nanchang, Jiangxi, focusing on the value of Haematococcus aureus application, product development and research. Key topics and other topics were exchanged in depth, and the cutting-edge achievements and views of the international academic community were shared. 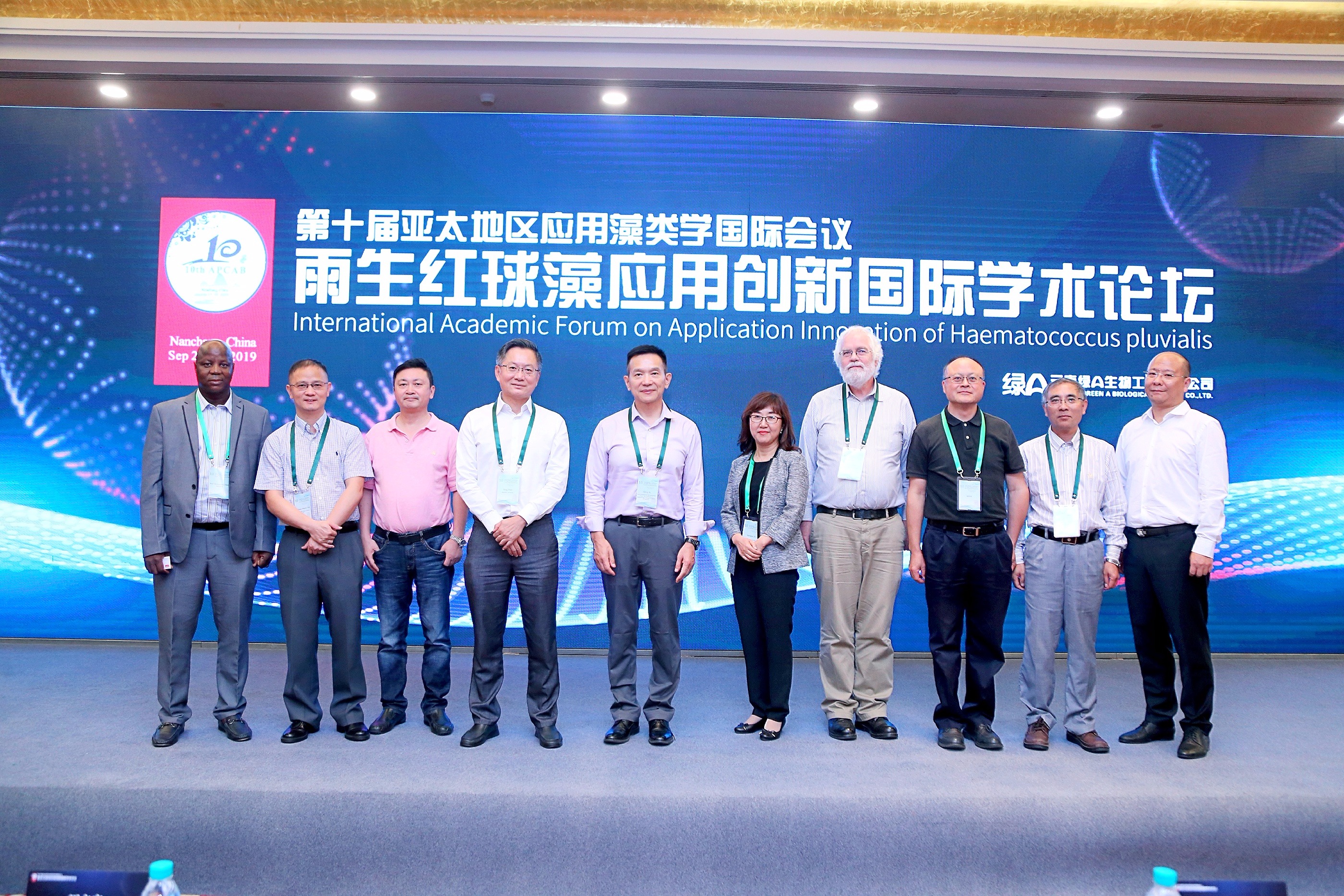 Group photo of experts on site

At the forum, not only the executive chairman of the conference, Professor Zhou Wenguang, the chairman of Green A Bio, Mr. Hu Zhixiang attended the event and gave speeches, but also invited the director of the Microalgae Biotechnology Center of SDIC Biotechnology Investment Corporation, and the Microalgae Biotechnology and Bioenergy Research and Development Center of the Chinese Academy of Sciences Aquatic Institute. Professor Hu Qiang, Director and Elected President of the International Society of Applied Algae (2020-2023), chaired the forum and published a special report entitled "History and Future of Industrialization of Haematococcus pluvialis". In addition, the forum also invited the head of the European Algae Biomass Association EABA, Vítor Verdelho Vieira, Visiting Professor of the Porto Business School and the Faculty of Arts of the Catholic University of Porto, Portugal; Michael A. Borowitzka, Professor of Marine Botany and Director of the Algae R & D Center, Murdoch University, Perth, Australia Professor; Professor Chen Feng, Academician of the International Academy of Food Science, Lifetime Chair Professor of Peking University, and Dean of the Advanced Institute of Shenzhen University; Professor Yuan Wenqiao of North Carolina State University; Professor Zhang Chengwu, the chief scientist of the national "863" project and a second-level professor of Jinan University, attended the presentation Keynote report. The event site also attracted scholars from South Korea, Japan, Australia, Indonesia, Thailand and other places to communicate with the guests.

It is understood that the "International Forum on Application and Innovation of Haematococcus pluvialis" is the fourth of the tenth Asia-Pacific International Conference on Applied Algae by the Asia-Pacific Regional Algae Application Society (APSAP) and Nanchang University. One of the big forums. More than 400 well-known experts and scholars from well-known universities and research institutes in more than 30 countries and regions gathered in Nanchang to exchange and share for "accelerating algae research innovation and sustainable development: making the world a better place". As an emerging important economic microalgae and one of the four important applied algae, the "International Academic Forum on Application and Innovation of Haematococcus pluvialis" was particularly dazzling at this conference.

Microalgae is an ancient life form and a major contributor to the evolution of the earth's ecology and higher life. With the in-depth study of microalgae in recent years, today we are in the fields of food, biomedical health, aquatic products, agricultural products, Micro-algae can be seen in industries such as skin care and cosmetics, materials, environmental protection, energy, architecture and arts, and even aerospace. The extensive application value contained in these primitive life forms is being accelerated. It is understood that the Asia-Pacific Algae Application Society was established in 1991 and is an international academic organization for the application of algae to human health and the environment in the Asia-Pacific region. The Asia-Pacific International Conference on Applied Algae is held every three years and has been held in Malaysia, Singapore, Thailand, Hong Kong, China, the Philippines, India, and Australia. Algae has huge application potential in food and animal feed production, environmental monitoring, waste resource recycling, pharmaceutical production, renewable energy production and other fields, and can produce good economic, social and environmental benefits.

In the 21st century, with the development of science and technology, economic microalgae has been widely used in various health foods, cosmetics, biomedical preparations and feed additives. Haematococcus pluvialis is another micro-algae with high economic value after spirulina and chlorella, and its astaxanthin content is 1.5% ~ 4.0%. At present, there are three recognized biological sources of natural astaxanthin: the waste of shrimp, crab and other aquatic products, the red yeast and the haematococcus pluvialis. Among them, the astaxanthin content in the wastes of aquatic products such as shrimp and crab is not only low, but also has high extraction cost. The average content of astaxanthin in natural red-haired yeast is only 0.4%. Therefore, Haematococcus pluvialis is recognized as the best biological source for producing natural astaxanthin in nature.

Astaxanthin extracted from Haematococcus is a highly effective natural antioxidant with strong antioxidant activity, 1000 times that of Vitamin E, and has strong ability to capture free radicals and antioxidants, enhance body immunity, and The functions of aging, preventing canceration, fighting inflammation, absorbing ultraviolet rays and preventing light damage, etc., can be applied in many fields such as cosmetics, food, health products and pharmaceutical manufacturing, and have high development value. Internationally, the supply capacity of Haematococcus is far less than the market demand, the market price is quite expensive (1,000 US dollars / kg), and it is also known as "soft human health gold" in Europe and America. With the gradual maturity of industrialization technology, Haematococcus has become a new growth point for the microalgae industry.

The red A haematococcus soft capsules and red A astaxanthin antioxidant stocks independently developed by the Yunnan Green A Biological Alliance and the Chinese Academy of Sciences using superior resources have received much attention and praise as the focus of application innovation at this conference. It is understood that the red A haematococcus soft capsule was launched in 2007, marking the successful industrialization of the green haematococcus company of Green A, breaking the 13-year monopoly of the United States and Japan, making Green A the largest red in China Chlorella producer. Consolidate Green A to lead the domestic chlorella industry and seize the latest commanding heights of microalgae research, development and industrialization.

As one of the three giants of the spirulina industry in the world, Green A has been relying on primitive ecological resources for microalgae research. As early as 20 years ago, it has successfully industrialized spirulina with its resources, scientific research and financial advantages. Has been engaged in the research, development and production of spirulina for many years, in the technical field and market scale, it is an absolute leader in China and has a place in the world. In the past 22 years, not only has the green A spirulina product been deeply rooted in people's hearts, it has become the preferred health care product for the Chinese public, but also brought tens of millions of foreign exchange earnings from Germany, Australia and other countries every year. At the same time, Green A Company used the technological advantages in spirulina research and production to keep up with the latest technology and development direction of international chlorella research, relying on technological and capital advantages, in conjunction with the Wuhan Botanical Garden of the Chinese Academy of Sciences, researching Large-scale production-related technologies have already made major breakthroughs in algae selection, production technology, and cultivation system research in 2007. For Yunnan Lv A Biological Engineering Co., Ltd., its ability to industrialize Haematococcus in a short period of time is inseparable from its consistent scientific research line of integrated production, learning and research. As one of the three giants of the spirulina industry in the world, Green A Company has gradually grown from a Chinese spirulina biotechnology research and development demonstration company to a leader in international microalgae research and development, and has gone abroad, with Cynotech in the United States, Japan Fuji Chemical competes. This shows that Green A has embarked on an internationalization path and is in line with international standards.